If you’re trying to budget your money and Hawaiian Airlines is looking a little pricey for island hopping, check out Mokulele Airlines and see how their prices compare. They often have better prices and the main difference is that you’ll be riding a small commuter plane with no flight attendants or snacks.

But that’s OK because most of the interisland flights usually take less than an hour. And you can see the pilots in flight!

All photos in this post (including the feature photo) are courtesy of Hawaii Department of Transportation. Mahalo!

Getting To Mokulele Airlines In Honolulu

Unfortunately, Mokulele Airlines is located at Terminal 3, which is not the near the main Terminals 1 and 2. I personally recommend the free shuttle, but there are other options available, too.

By shuttle: Honolulu International Airport has the “Intra-Airport Transportation System” which is a fancy word for free shuttle service. The shuttles serve Terminals 1, 2 and 3 every 20 minutes. You can board the shuttles from Terminals 1 and 2 curbside on the ground level. Just follow the shuttle signs to get to the right spot. From terminal to terminal it takes about 5 to 10 minutes. (Terminal 1 and 2 are right next to each other.)

By foot: I wouldn’t recommend walking to Terminal 3 since like most big city airports, the surrounding area is not the safest.

Local Tip: The Honolulu airport area does have some homeless people. I used to work in this area and generally they leave you alone, but just be mindful if you decide to explore.

By Uber or Lyft: While this is a viable option, it’s not the most convenient. Rideshare cars can only pick you up from the second level, which means after picking up your luggage from the first floor, you have to find an elevator or escalator (not an easy feat).

Parking at Terminal 3: There are 42 lots available for parking (plus two additional American with Disabilities Act stalls). You’ll have to pay your parking fee in advance before you check in.

Checking In At Mokulele Airlines, Honolulu

Checking in for your Mokulele Airlines flight at Honolulu International Airport is not a difficult or grand affair as you can see. Everything is bare-bones, but it works with such a small group of people flying at any one time.

In fact, for those who have never flown on a commuter plane before, this may be a fun, local experience. No worrying about getting lost in the airport or waiting around forever for your section to board.

Local Tip: My friends always find it funny that the pilot will choose where you sit. The plane needs to be balanced so they decide on where the bags should go and where you should go to!

Tips About Riding Mokulele Airlines Or Any Interisland Commuter Plane 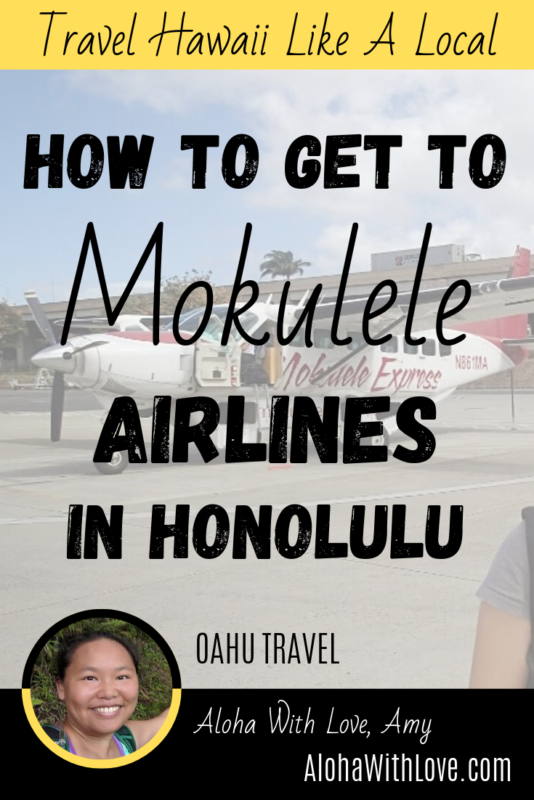 The Best Island To Visit In Hawaii –...

The Real Hawaii is the Real Way to...