Home BlogOahu Where do you Sit on the Plane to get the Best View?
Oahu

Where do you Sit on the Plane to get the Best View?

While most airports generally look the same, Hawaii is a treat because of that first amazing view you can get of our beautiful islands. Flying to Hawaii you’ll see the lush, dark green mountains embrace Honolulu almost like a hidden city in an Indiana Jones movie. While we have plenty of islands to choose from, whether or not you plan to stay in Oahu or a neighbor island, chances are you are flying into Honolulu International Airport first. After landing at this main hub, passengers going off to a neighbor island have to transfer to the inter-island terminal to catch their connecting flight.

Tip: If you’re catching a connecting flight to a neighbor island, make sure you leave enough time for you to get to the inter-island terminal! If your flight is delayed, you’ll be rushing the whole way with no time to enjoy the uniqueness of the outdoor atmosphere of the Honolulu International Airport. If you are running late for your next flight, make sure you get on the Wiki Wiki shuttle that the staff will have ready for you right outside the automatic doors of your arrival gate. Just ask if you don’t see it.  (My personal advice to you as a former lei greeter in the airport. Much of my free time was spent frantically running along with customers to their next flight). 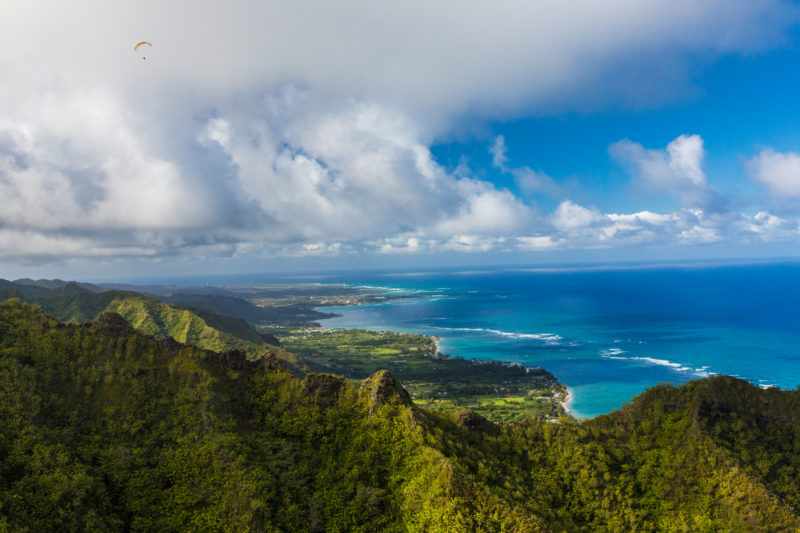 For most cases, in order to get the best view while flying to Hawaii, try to get a seat on the starboard side of the plane (that’s the “right” side of the plane while facing forward for those of us not fluent in vessel lingo). If that’s not possible, no worries! When leaving the island, aim for a seat on the port side for that spectacular view. If you’re flying into Oahu under special circumstances like a smaller plane company or private jet, it would be best to ask the agents/pilot which side is best since the landing strip may differ from the large commercial airlines.

Maui Must Do: Hana Road

Only One Hour In Waikiki With So Much...

Dole Plantation Is A Field Trip From Hawaii’s...

How to get Free Tickets To Pearl Harbor’s...

Hike To Kaena Point From Mokuleia And Maybe...

Sweat It Out With Oahu Workout Hikes